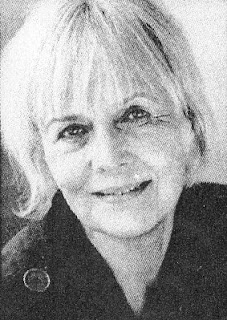 Louise Larchbourne’s mother was the poet Rosamund Stanhope; and she grew up both intimate with poetry and slightly daunted by her mother’s minor but consistent success, combined as it was with extreme efficiency – she was also a teacher of English – and considerable glamour.

In her early twenties she graduated from Birmingham University in English, and then became an actor and a ‘local poet’, performing regularly in Birmingham. Michael Pinney, of Bettiscombe Press, attended a reading and asked if he could publish a collection; unfortunately he went bankrupt shortly afterwards, on the verge of publishing her book. Some poems were subsequently published in a Birmingham Arts Lab collection of four women poets.
Her acting career was suspended after 12 years when she became a single mother.  She wrote little during her son’s childhood, when the work of supporting him, through freelancing in publishing, preoccupied her.
A few years ago she started writing more and joined Oxford Backroom Poets. Now she is steering her career back into performance and writing. As well as acting, she is interested in performance art, which she sees potentially as 3-d moving poetry; she had the opportunity of doing some when she was acting professionally, and loved it. For a year she has also been giving readings and history sessions, and teaching creative writing, in residential homes.
Among her favourite poets are John Donne and Wallace Stevens.  She is edging towards a collection

Earthwash             August 2012
On The Virgin and Child with Saint Joseph and the young Saint John the Baptist attributed to Michelangelo Buonarroti, brush drawing in a thin wash of brown oil paint (probably bistre), on a ground prepared with a green earth colour. The unusual treatment of the subject shows it as probably after 1520.
Posted by nick owen at Monday, September 10, 2012